Unfortunately, there are dogs that are allergic. This allergy has often been built up over time.
Allergy in dogs can express themselves in all sorts of forms, such as : itching, bald spots, inflammation, red skin, enz. 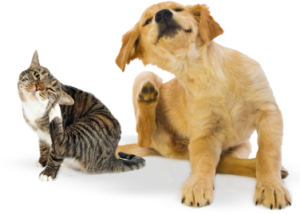 Owners with allergic dogs will end up with the vet if complaints persist. Allergy tests often indicate that the dog has an allergy to dust mite, protein and chicken. Striking that so many dogs seem to have the same allergy.

Usually the owner is advised to carry a hypoallergenic chunk. Changing nutrition is an appropriate approach in itself; 80% of the allergies are the result of improper nutrition.

By changing the dog’s diet, many of his complaints can be cured. However, many chunk feed, including hypoallergenic agents, contains substances for which the dog is just allergic. All chunk food contains cereals and artificial additives and many dogs react poorly here.

In order to discover which ingredient a dog is allergic to, an elimination diet can be followed. The essence of an elimination diet is that the dog’s diet is reduced to as few flavors as possible and as pure ingredients as possible. This is possible with HAAKS®B.A.R.F: every HAAKS®B.A.R.F flavor contains meat, organs and bone of one prey species. And only that. HAAKS®B.A.R.F contains no conversion agents, no artificial flavors and no added vitamins or minerals. All the good building blocks are in the ingredients themselves. It is clear what the dog is eating and he gets all the nutrients he needs.

Begin with a HAAKS®B.A.R.F elimination diet

Does your dog have complaints and you want to discover through an elimination diet if your dog is allergic. You may want to start with one taste for a one month period. This gives your dog the opportunity to get used to the food and gives you the opportunity to do his beneficial work. A good taste to start with is Horse. After two weeks, you may already see results in the form of improvement and it may even be that the complaints have already disappeared.

If improvement takes place in the first month, you can introduce a new taste to your dog in the next month, for example Goat or Lam.

Should there be no improvement after one month with Horse, you can replace Horse by another. Experience tells us that you can go further with Rabbit. You essentially begin the elimination diet with Rabbit. Now it is also necessary to improve after this month. Then a second taste can be introduced.

After the first month

If you have found a taste that shows you improvements, proceed with the second taste. You perform this for at least two weeks. If your dog reacts well, you already have two flavors. In the end we want to feed a food with as many flavors as possible, preferably four flavors in three weeks.

After 6 weeks we introduce chicken. Chicken is – unfortunately – often raised by the feeding of a lot of grain in a short period of time. The chance is therefore that your dog is responding poorly here. If you see a deterioration, you will of course stop immediately by feeding Chicken. Do not fall back on the two flavors you’ve already taken, but add a third. If the complaints decline again, and that will be clear within 1 to 2 days, you have three tastes that your dog is responding to well.

If your dog also reacts well to Chicken, you can introduce another following two weeks after the second taste. For example, Beef.

The following flavors and variety

Every time your dog reacts well if you introduce a new taste, you can add a different taste to your diet every two weeks. You will achieve the widest range of flavors from which you can make up your diet.

Sometimes it turns out that a dog is very allergic and ultimately can only tolerate two tastes. You are concerned because he does not enter four animals in three weeks. Rest assured that can not be harmful. Most importantly, your dog is eating food that contains the correct building blocks without getting any complaints.

Some owners choose to add supplements in that case. That is of course a free choice. We advise you to do a check with a holistic vet, including your experiences with the elimination diet. He or she can advise you on a good way to expand your animal’s diet.